Parents Think Their Son’s Pet Lizard Is Pregnant, Have A Hilarious Experience At The Vet’s Office 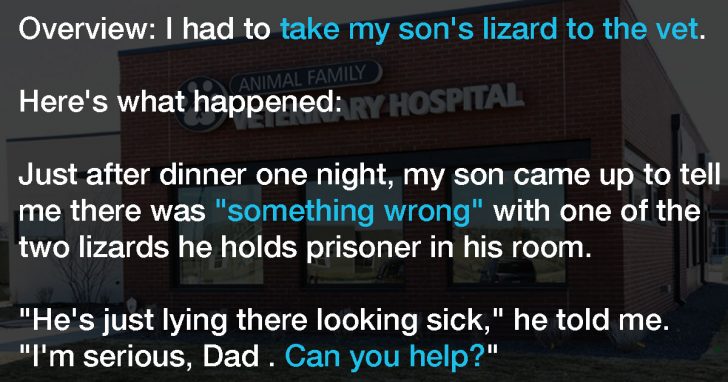 Advertisement
Quiz by Polls on April 2, 2018

If you have raised kids (or been one), and gone through the pet syndrome, including toilet flush burials for dead
goldfish, the story below will have you laughing out LOUD!

Overview: I had to take my son’s lizard to the vet.

Just after dinner one night, my son came up to tell me there was “something wrong” with one of the two lizards he holds prisoner in his room.

I put my best lizard-healer expression on my face and followed him into his bedroom. One of the little lizards was indeed lying on his back, looking stressed. I immediately knew what to do.

“What?” my son demanded. “But their names are Bert and Ernie, Mom!”

I was equally outraged.

“Hey, how can that be? I thought we said we didn’t want them to reproduce,” I said accusingly to my wife.

“Well, what do you want me to do, post a sign in their cage?”she inquired (I think she actually said this sarcastically!)

“No, but you were supposed to get two boys!” I reminded her, (in my most loving, calm, sweet voice, while gritting my teeth).

“Well, it’s just a little hard to tell on some guys, you know,” she informed me (Again with the sarcasm!).

By now the rest of the family had gathered to see what was going on. I shrugged, deciding to make the best of it.

“Kids, this is going to be a wondrous experience,” I announced. “We’re about to witness the miracle of birth..”

“Well, isn’t THAT just great? What are we going to do with a litter of tiny little lizard babies?” my wife wanted to know.

We peered at the patient. After much struggling, what looked like a tiny foot would appear briefly, vanishing a scant second later.

“We don’t appear to be making much progress,” I noted.

“Do something, Dad!” my son urged.

“Okay, okay.” Squeamishly, I reached in and grabbed the foot when it next appeared, giving it a gentle tug. It disappeared. I tried several more times with the same results.

“Should I call 911?” my eldest daughter wanted to know.

“Maybe they could talk us through the trauma.”

“Let’s get Ernie to the vet,” I said grimly.. We drove to the vet with my son holding the cage in his lap.

“I don’t think lizards do Lamaze,” his mother noted to him.

The vet took Ernie back to the examining room and peered at the little animal through a magnifying glass.

“What do you think, Doc, a C-section?” I suggested scientifically.

“Oh, very interesting,” he murmured. “Mr. and Mrs.. Cameron, may I speak to you privately for a moment?”

I gulped, nodding for my son to step outside.

“Is Ernie going to be okay?” my wife asked.

We were silent, absorbing this.

“Exactly,” the vet replied, relieved that we understood.

“What’s so funny?” I demanded, knowing, but not believing that the woman I married would commit the upcoming affront to my flawless manliness.

“That’s enough,” I warned. We thanked the vet and hurriedly bundled the lizard and our son back into the car.. He was glad everything was going to be okay.

“I know Ernie’s really thankful for what you did, Dad.” he told me.

“Oh, you have NO idea,” my wife agreed, collapsing with laughter.

Memory of your husband pulling on a lizard’s winkie: Priceless!

Moral of the story: Pay attention in biology class.

Please SHARE this hilarious story if you laughed out loud! 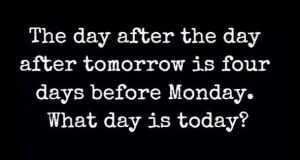 Pastor Asks Young Boy Why He’s Staring At A Memorial Plaque. The Boy’s Response Is Pure Gold
Next 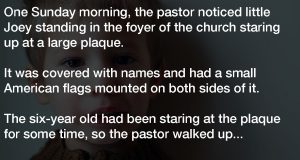